2015 has been a dramatic year in politics in Sri Lanka.  A Presidential as well as General Election within the first 8 months of the year and the country saw a new President as well as a new government come into power.  The new political order was brought into power on a wave of mobilisation from a range of civil society groups and actors reminiscent of the political transformation that took place in 1994.  Then too, a government that had been in power for 17 years, who had overseen the violent suppression of an insurrection in the South was defeated by a relative new comer into politics.  This paper attempts to examine the changes that have taken place in 2015 in relation to certain established facts about Sri Lanka’s political system, particularly the dominance and endurance of the elite.  It argues that the focus on elite politics as well as the violence resistance against the state by groups such as the LTTE and the JVP has resulted in the lack of attention paid to the endurance of certain democratic impulses in Sri Lankan society.  This is examined in relation to the dissent and resistance displayed by smaller groups that played a crucial role in the political transformations both in 1994 as well as in 2015.

Jayawardena, Kumari. (2000). From Nobodies to Somebodies – The Rise of the Bourgeoisie in Sri Lanka. Colombo: Social Scientists Association.

Quarles Van Ufford, Phillip, Giri, Ananta Kumar and Mosse, David (2003). “Interventions in development: towards a new moral understanding of our experiences and an agenda for the future” in Phillip Quarles van Ufford and Ananta Kumar Giri (eds), Moral Critique of Development: in search of global
responsibilities. EIDOS, London: Routledge

Venugopal, Rajesh. (2011). “The Politics of Market Reform at a Time of Civil War: Military Fiscalism in Sri Lanka”. Economic and Political Weekly. Vol XLVI No 49 pp 67-75 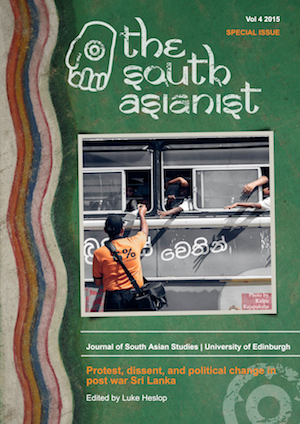